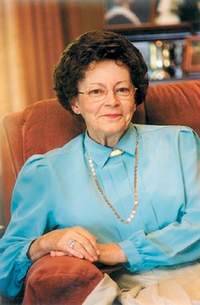 After receiving a BA from , followed by a BLS from McGill, Eileen Travis began her working life as Bookmobile Librarian in her native In 1960 she moved to and joined the Saint John Free Public Library as head of the Children's Department. She became Regional Librarian in 1969, a position she held until her retirement in 1997.

She has volunteered countless hours to many organizations, including the 1985 Canada Summer Games, Saint John Arts Council, Board of School Trustees District 19, for Girls, Canadian Library Association and Catholic Women's League, among others. She was instrumental in working to build a new church for Our Lady of Perpetual Help Parish in Rothesay. She served on the Board of Directors of ACOA \and was elected Vice-Chair of the ACOA Advisory Board in 1991. She has been a member of the Board of Governors of St. Francis Xavier University and a Patron of Hestia House. In 1983 Eileen Travis became the first woman elected as President of the Saint John Board of Trade. Her more recent interests include serving on the board and as President (1999-2001) of Opera New Brunswick.

Dr. Travis has received numerous awards and recognition for her service including an Honourary Doctorates from and Université de Moncton.